I’m kind of hoping you’re intrigued enough by the title to read this post because it’s rather unique in the world of blogging – it’s full of ugly photos of my home and problems that can be easily fixed but aren’t. Now before you run for the hills of roll your eyes because you think this is a humblebrag, hold on! I’m going to showcase 7 projects I need to address in my home or I’ll be photoshopping them forever.

That’s right – the healing tool and lasso are my favourite tools for hiding stains and stray wires. I’m putting it all out there for you guys to see. I was actually inspired by a post that Emily Henderson wrote last year in which she detailed what needed to change before they could sell their home // here //. I thought it was a great way to show that our homes aren’t always perfect and that we have just as much going on “behind the curtain” as we do on display.

Don’t judge me too harshly… all these photos were taken with zero cleaning or staging.

So yea, incase you weren’t aware or haven’t been inside my home, there are now only 7 things left to address. These aren’t huge issues, in fact they’re small enough that I can correct them with Photoshop in time for a post or just explain them away in person, but they’re big enough that I need to resolve them or slowly go mad. I’m done with the areas that need spot touch-ups, sanding, painting, and fixed wiring. In the hopes that airing my dirty laundry helps hold me accountable, I’m sharing them all with you in gruesome detail.

And then there’s the closet – it isn’t good. It occupies a whole wall in our small bedroom, and with two sliding doors it can normally hide the mess within. But with Spring cleaning on my mind I’ve had the doors open far more than usual and the clumps of cat hair, random socks and overstuffed racks have got me concerned. I need to rethink clothing storage in our small master, I’m just not sure how I’m going to do it. 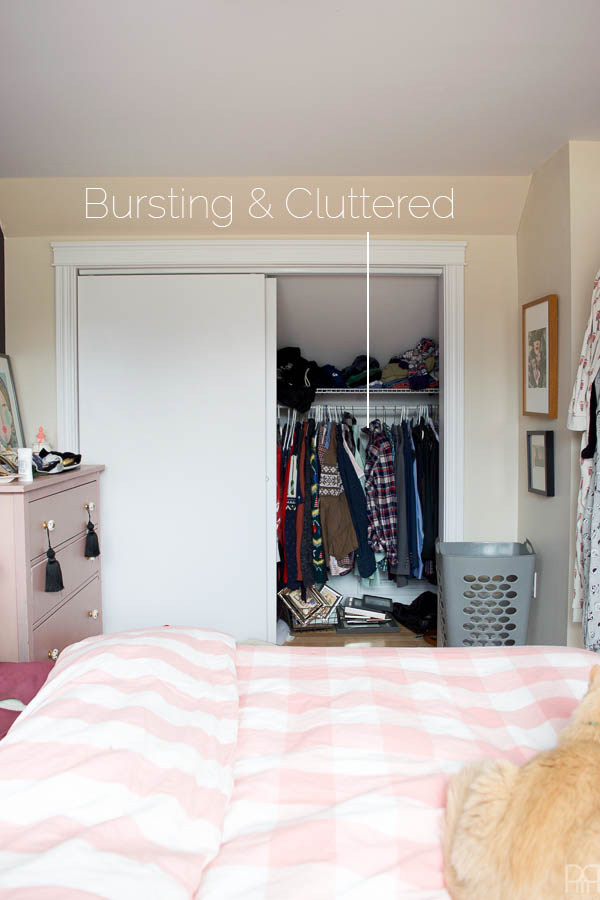 I would love to move the dresser into the closet and make space to centre the bed and get bigger nightstands, but that would require us to clear-out half of the closet, and that’s not easily done. So, I’m calling you out closet! You will be address before the summer is out. Mark my words!

This fall I spent far too long trying to hang the curtains from the ceiling in our bedroom. Would you believe me if I told you that I legit hung the anchors incorrectly and the rod kept falling from the ceiling?! Well, DH was down with that for about 2 secs. before insisting I fix it. I did, sort of. 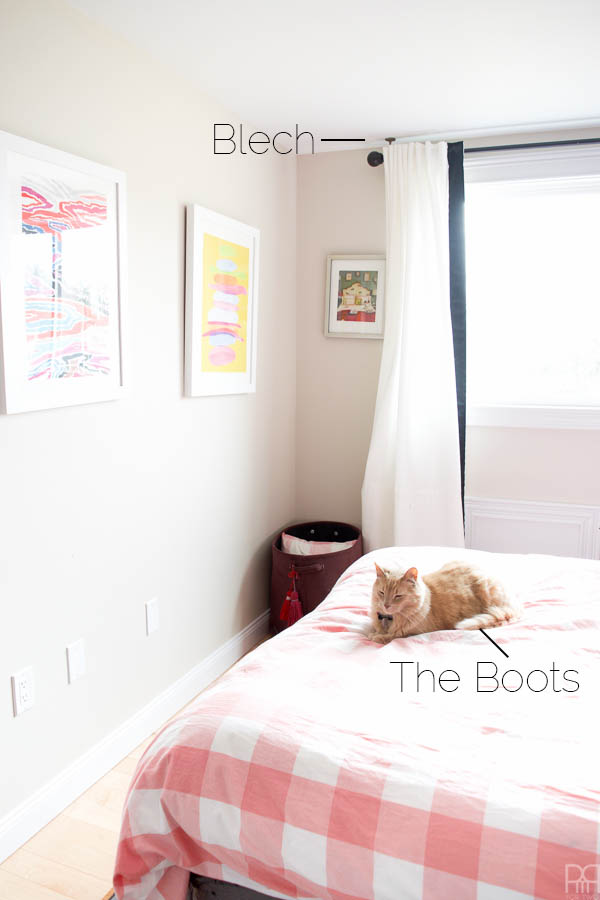 I fixed the anchors and then heft giant holes in the ceiling for like 3 months (I wish I was kidding) before spackling-over those holes. It’s been another 3 months and I still haven’t sanded-down those giant clumps of spackle on our ceiling. They’re hidden behind the finials on the rod, but I know they’re there. They follow me around the room and keep me awake. Between the spackle that needs sanding and the closet, the master bedroom is due for some touch-ups soon. 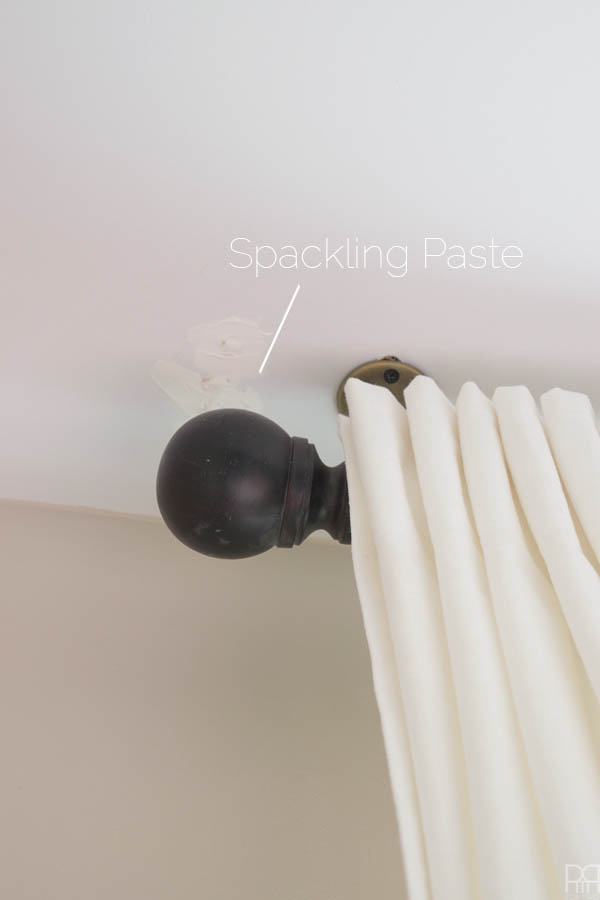 This past summer after we moved in I was toying with the idea of using vinyl to create giant stripes on one of the walls. I wanted to do something like this in the small space // here //. Thankfully I was smart enough to test out a strip of vinyl because it was not the removable kind and took a good chunk of the paint with it when I removed it. I painted over it hastily this fall when I was completing my renter-friendly tiled wall // here // and then colour matched it using Photoshop.

It is now Spring and I should probably fix it. The thing is, it will require that I paint the entire bathroom because when they painted this Q before we moved in, they used some sort of off-white that isn’t colour-matched anywhere. As such, spot-fixing isn’t an option. 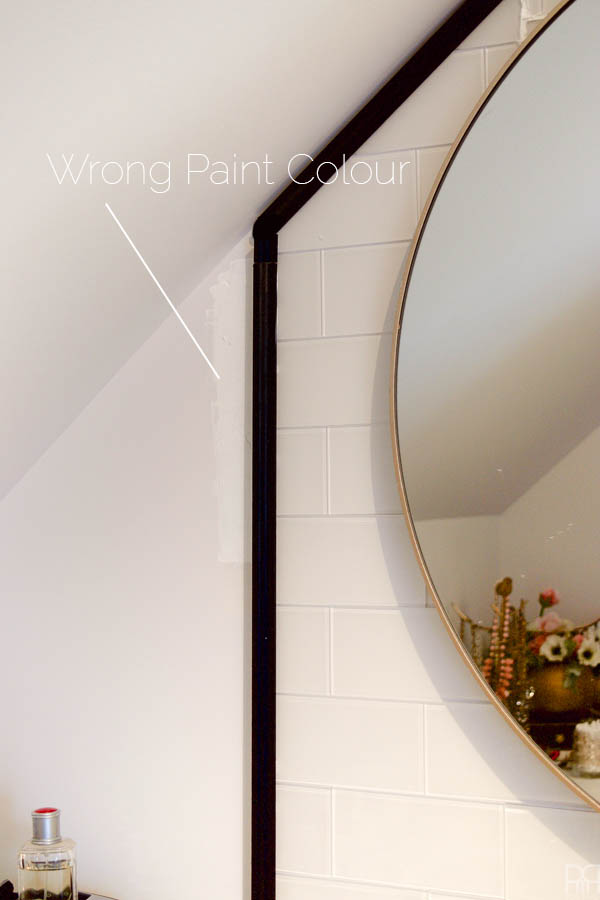 It has been the being of my existence. While I don’t currently have a litre of white paint kicking around, I’m sure I could find some at some point. If I haven’t updated you on this by Christmas, please, someone call me.

Have you ever wondered why you don’t see the living room  from the other side of the room? There’s a good reason! The IKEA make-up table we use as our console table has an unfinished back that is just particle board. We haven’t painted it yet because we keep thinking we’ll move the make-up table elsewhere. 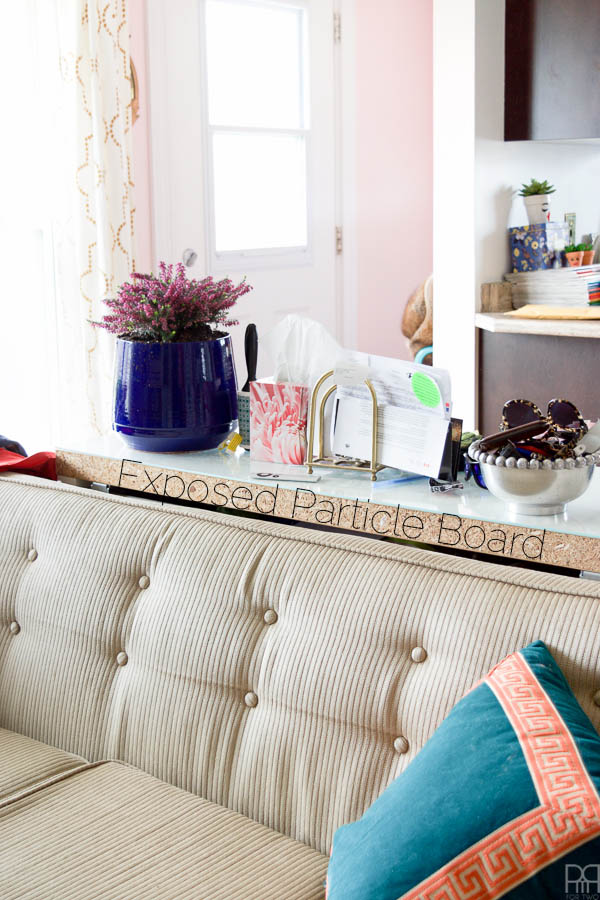 In the meantime, I have to fix it in any photos I take in that direction, so instead I just avoid it. I hope you don’t blame me, because really there isn’t much to see in that direction except to the entryway.

These are visible between the TV and our renter-friendly built-ins // here //.  I usually photoshop them or somehow magic them out of the shot for a minute, but no solution has been permanent. They keep finding their way out from behind wherever I hid them. 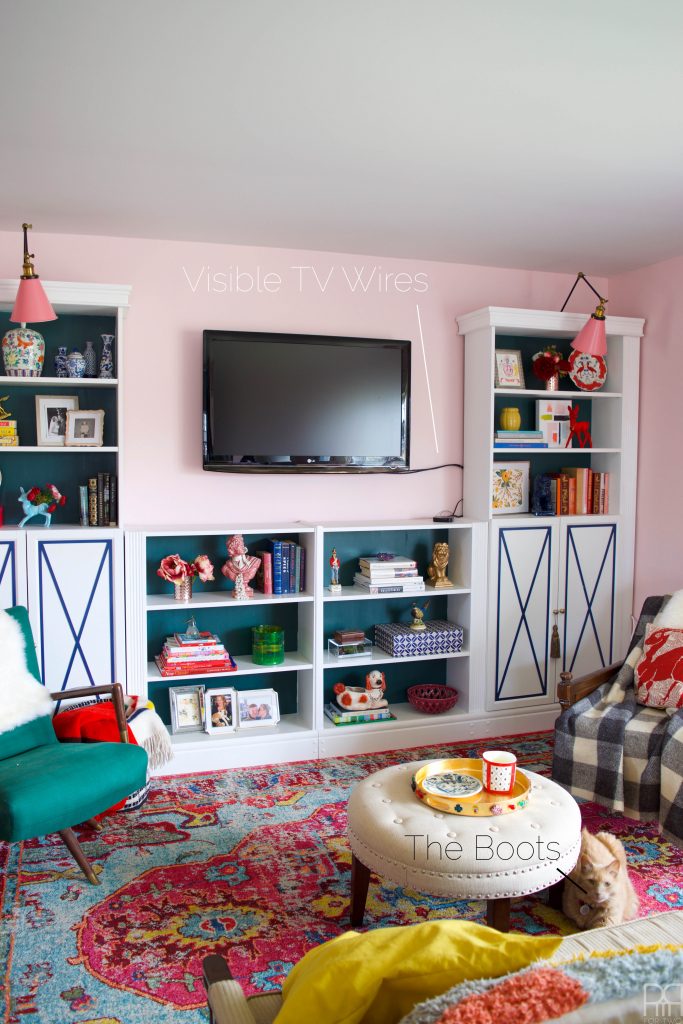 I need to figure-out a way to tie them up behind the TV or poke them far enough behind the book case that they’ll never creep out. I have a feeling that will require a really long stick though, and I’d rather not.

6. The Holes In The Dining Room

Back when we were assembling our built-ins DH brought all the baseboards in and leaned them against the wall in the dining room. He didn’t know it at the time, but he had actually put a few holes in the wall! 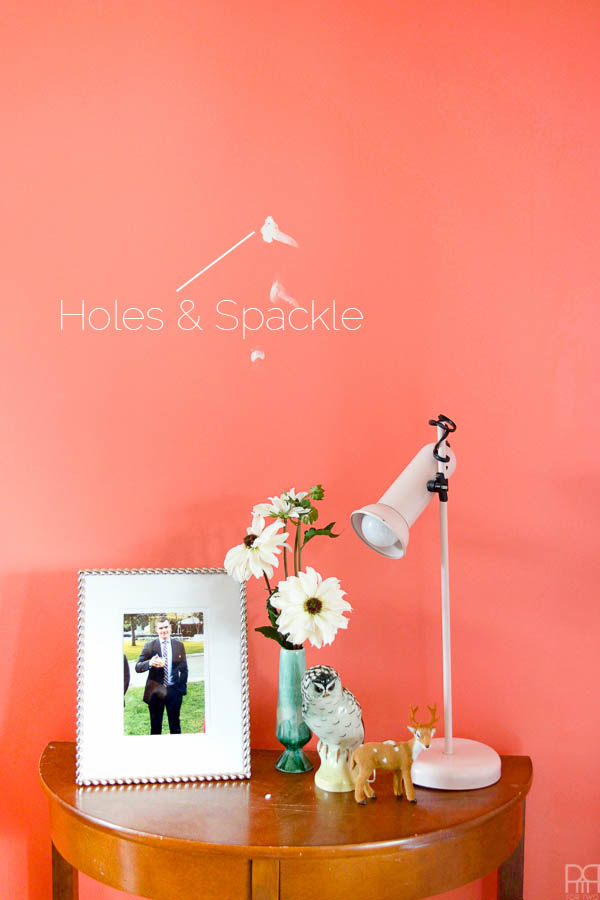 I’ve speckled them… sort of. Guys, can I even call myself a true DIYer if I haven’t done that?  I’m going to chalk it up to not wanting to go buy a sample to paint over the freshly spackled walls. But why?! I’m in the Home Depot at least once a week and the samples are 3$. It’s another mystery.

There is an epic show of force between DH’s and my shoes on a daily basis. Who will get the coveted spots next to the vents? Whose shoes will get caught under the door when it swings open, therefore acting like giant door stoppers and stymieing the entrance of whoever is at the door. Or worse, whose shoes will get thrown in the small closet with the door that opens the wrong way? 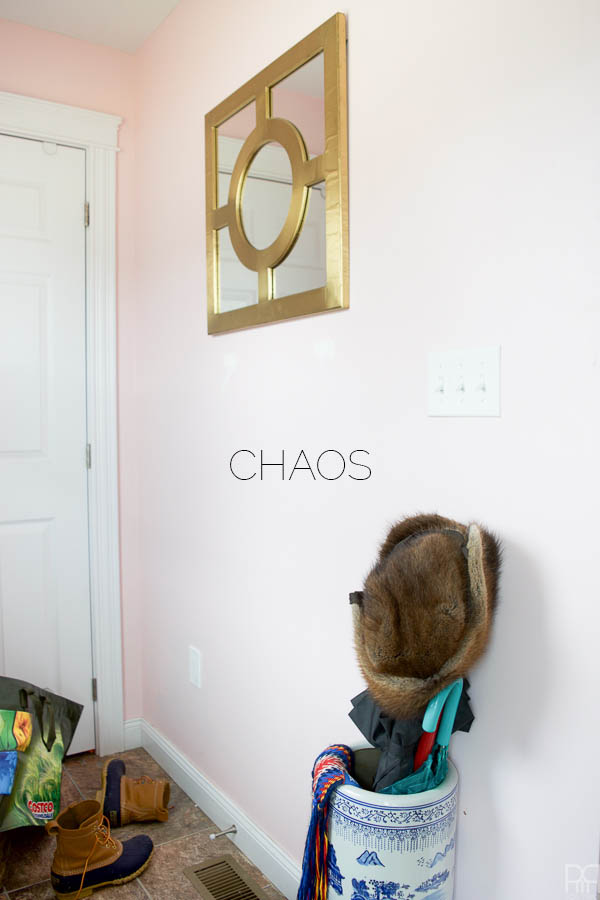 We used to have a coat rack on the wall under the mirror but this winter it started falling out of the wall under the sheer weight of so many winter coats. We tried to put it back but it wouldn’t hold. Now we don’t have a place to hang coats and our shoes are everywhere. I need solution that is not only functional, but stylish and will work in such a small space.

I’ve got something in the works for this space, but it will have to take a back-seat until after the One Room Challenge.

So there you go. You’ve seen my dirty laundry. I don’t know why I haven’t addressed any of these very small problems yet, but I think it has something to do with the fear of the banal or the inability to muster the energy for such a small task that is seemingly complex. 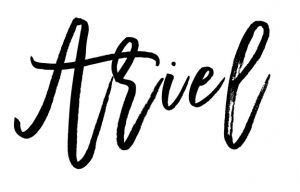 I know you guys are OBSESSED with the vintage Chri

I’ve been dutifully making my own Holiday decor

AD: I used @blackdogsalvage line of paints to give