Y’all asked for it, and here it is! June’s birth story. She arrive August 26th at 2am after 23hrs of labour, and 3 hours of pushing. She came roaring into the world under the loving gaze of her father, the doula, and all the amazing staff at the hospital. 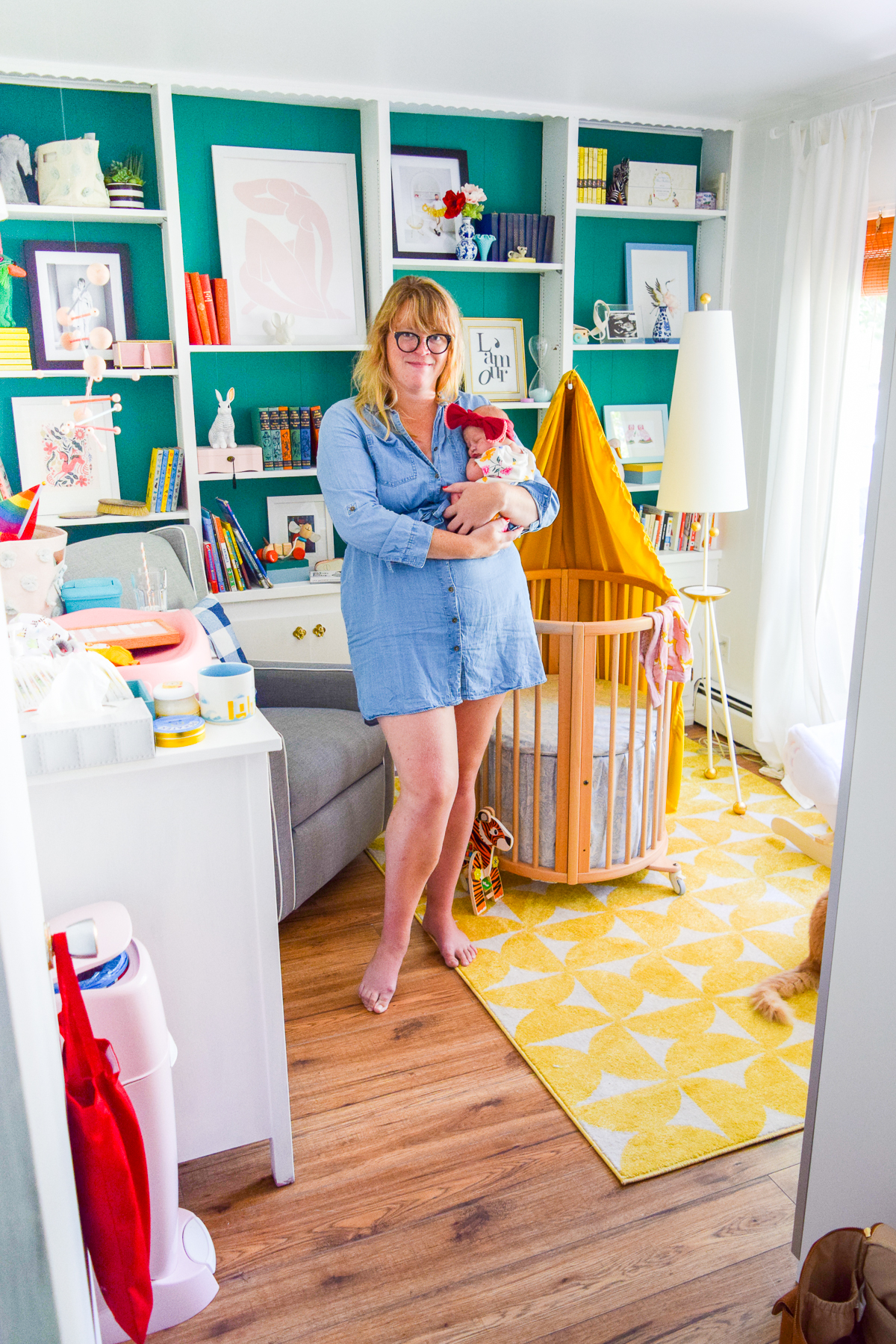 You know how people say that looking back, they knew? I did! That Saturday morning I woke up and knew I had to crush 4 photoshoots, or they weren’t going to happen. We had dinner plans that night, and as we waited for our guests to arrive I stood in front of the oven crushing corn chips and staring into space. The bump’s juju was different, and even Dan could tell.

When our guests left and we finally got ready for bed, I was having light cramping and told Dan it might be time, unless of course it stopped.

When we had seen the OB on the Friday they told me I was 60% effaced and 1cm dilated, so they said labour could start at any point, so this wasn’t news to us.

Labour started early in the AM

Like, 3am. That’s when I was officially awake with cramping aka contractions. I started trying to time them with my app, but quickly got distracted when I noticed they were 2 mins apart and lasting 1 minute. That’s when I woke Dan. I was worried she was coming NOW and that we had missed our 5-1-1 window to get the doula and head to the hospital.

After re-assuring Dan that I was in fact in labour, and him helping me time the contractions, he loaded up the car and we headed off the hospital at 5am. But not before he ate a piece of cake like a rabid racoon. In his words “in case I don’t get to eat again for a few hours” 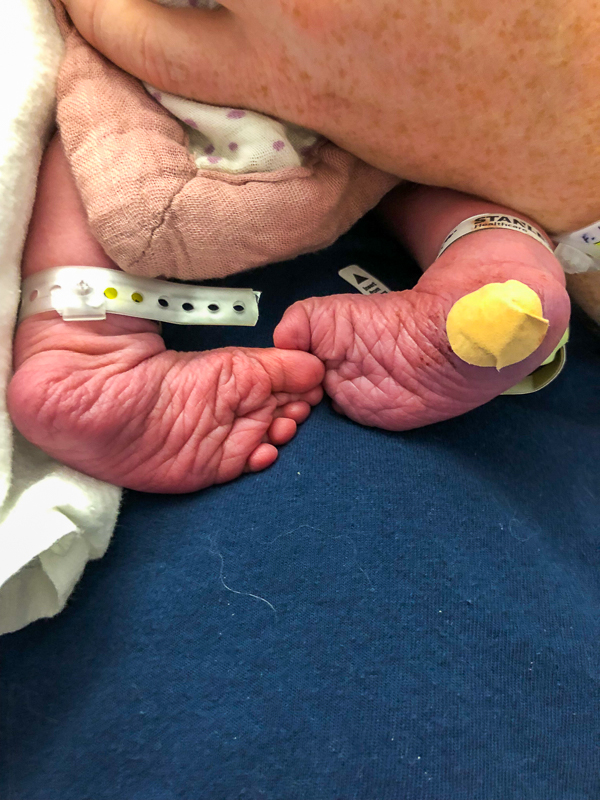 We got the hospital and found our way to the wrong section of the labour and delivery twice! It’s like we hadn’t done the tour. But to be fair, there’s a critical difference between “5am and in labour” and “well rested before dinner.”

After they checked my dilation and effacement (almost completely effaced, but only 2cm dilated), I started throwing up during my contractions. Apparently that’s how my body wanted to handle the pain! By then the doula had arrived so we tried some pain management techniques, and I found the shower to be the most comfortable.

By early morning I hadn’t progressed any further and my pain management plan shifted to morphine shots so that I might sleep a bit instead of just throwing up. I was having back labour in the nerve cluster where I had got shingles this summer, so I was having a hard time juggling both.

We had also experienced a shift change, and our new nurse was a bit more technical in her approach, and I enjoyed her cervix checks much less. She wasn’t keen on stopping when I told her to, so that put Dan and the doula on the defensive. Normally when you say “stop” they have to. She did not.

By 6pm I hadn’t progressed any further than 4cm so they told us that if we stayed I would start receiving interventions, but if we went home I could return when I had progressed more. So we left.

For the record – my waters had not broken yet. 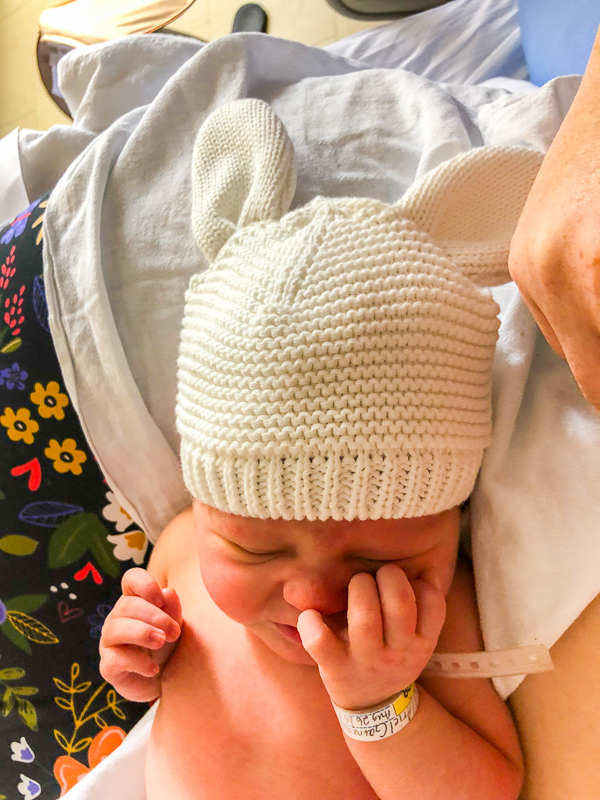 Once we got me home, I passed-out on the bed and over the next 3.5hrs I dilated 6cm and transitioned fully. Only, we didn’t know that. By 9:30pm I was howling and in quite a bit of pain. I gave Dan our codeword for “GIVE ME THE EPIDURAL.” We thought I might only be at like 5 or 6cm though, which would give me time for the epidural, but we were a little off.  They had told Dan to bring me back in when I was howling, so we packed-up and left again.

Once we were back in the hospital it took them an hour to check my dilation because I was having rolling contractions, and that’s always fun, but thankfully I wasn’t throwing up anymore. There wasn’t anything in the tank though, so that’s why.

Once the nurse was able to check my dilation we got quite the surprise! Totally effaced and 10cm dilated. In her words “time to start pushing.” That also meant no more pain management options other than the gas.

So I started pushing around 11pm. I spent an hour on my back with the gas, and that was lovely. But since she hadn’t descended much, they encouraged me to try on the toilet. The second I sat on the toilet the real pain began. Everything was excrutiating and I could feel her sliding down the birth canal. I asked for a lot of things, and got none of them, except water.

After an hour of that, my water broke! it was a loud pop, and then a slow trickle. Not quite the fanfare we had anticipated, but still. It mean that June was having a much less stresfful arrival, so we took that as a win.

I was eventually maneuvered back to the bed for the last round of pushing. It seemed to go by quickly, but was about another hour before I got her head out. 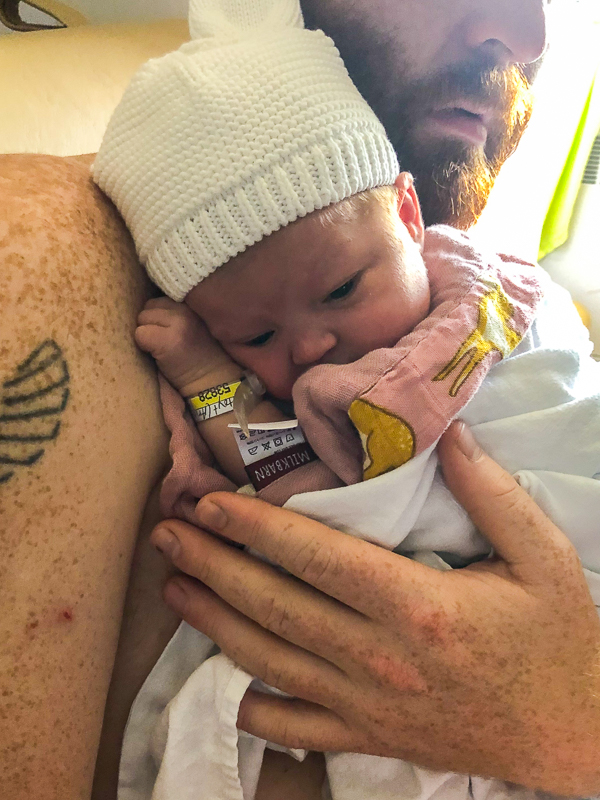 In the words of Dan and the doula, you were one stoic lady. I didn’t make much noise, it seemed like a waste of energy, and I wanted to rest as much as I could between pushing. Don’t get me wrong, there were some screams and a bit of swearing, but overall I just focused on my breathing and pushing.

Once her head was out, it was one or two more pushes before the rest of her came out, and then they quickly placed her on my chest. Family unit complete! This is when the doula faded into the background and the hospital staff did their bit, including stitching me up. 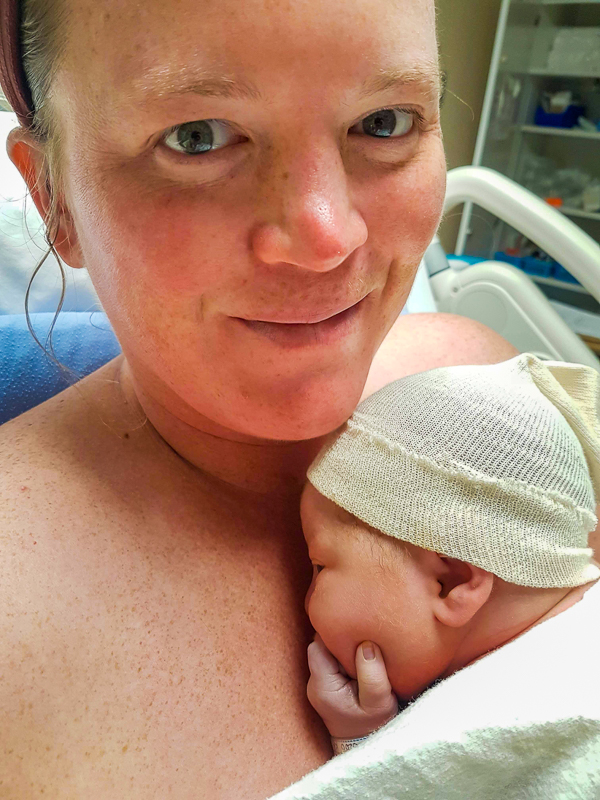 We both enjoyed lots of skin to skin with baby girl, and once I was stitched and she had fed, they let me have a shower. What a shower! After a full day of sweating, and being covered in blood, it was the best feeling ever.

We got settled in the baby ward in our room, and Dan was sent on a mission to bring me food at 5am. Meanwhile I just kinda stood and stared at her.

The rest is ours, as those first few hours together were pretty magical and crazy. It’s all still a bit of a blur, but we’re one happy family unit at home, even if Bruce is still unsure about her. The cats however, are obsessed. 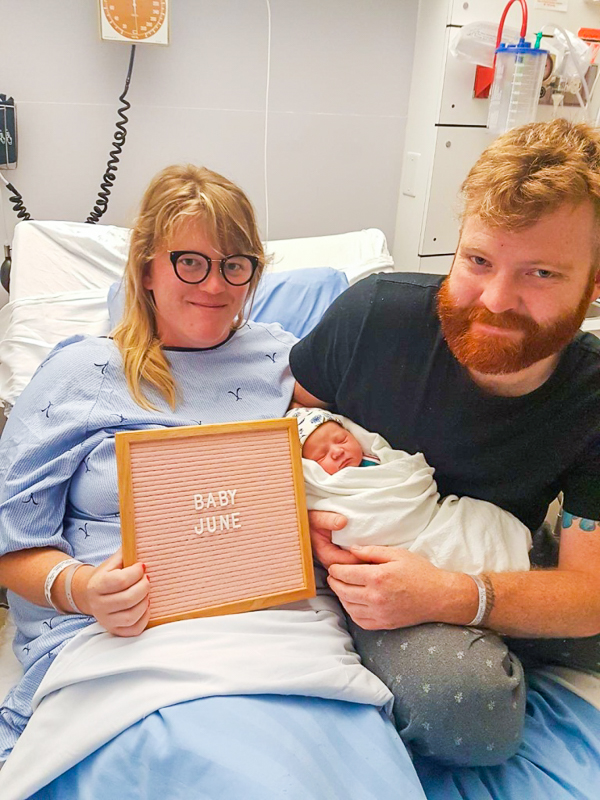 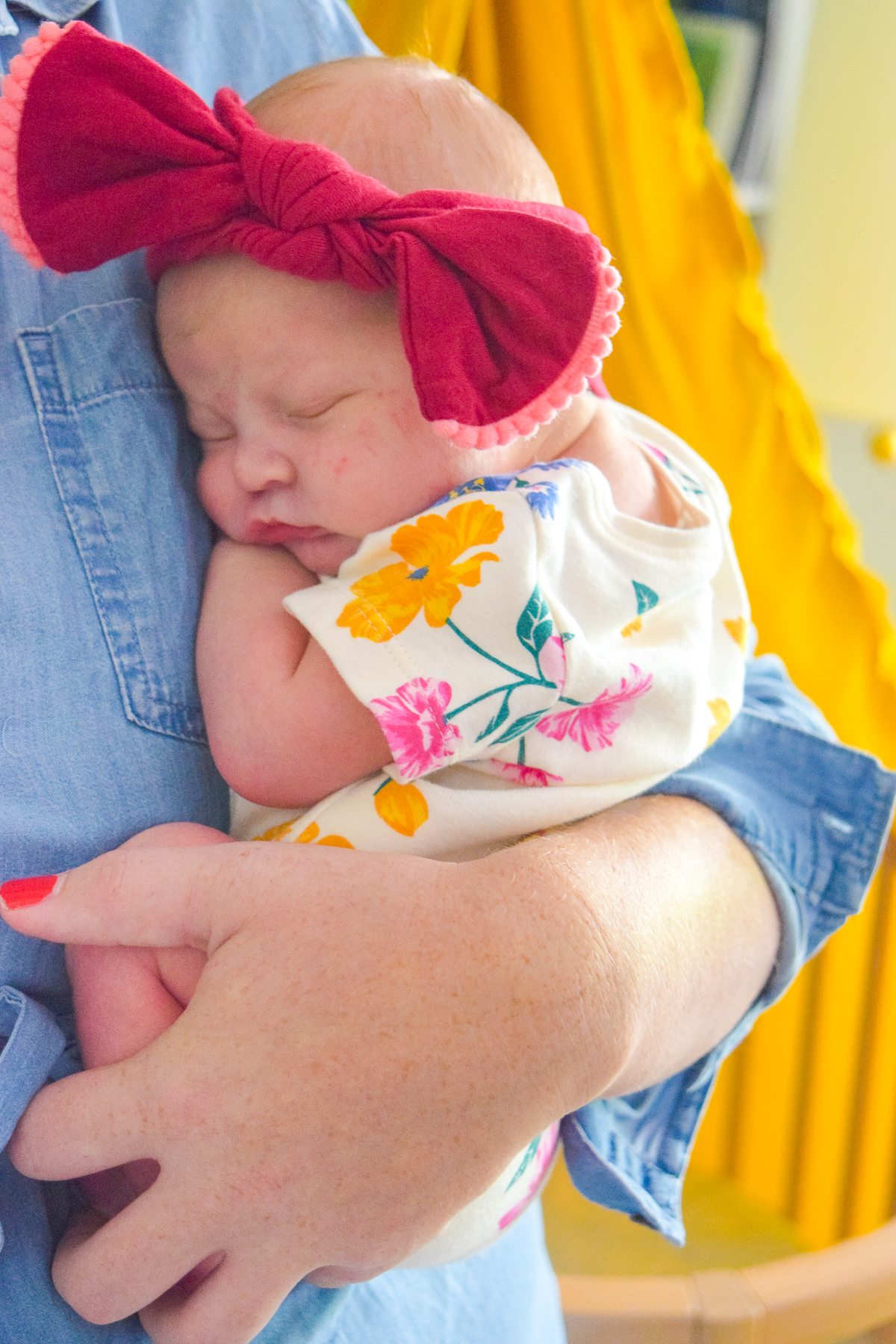